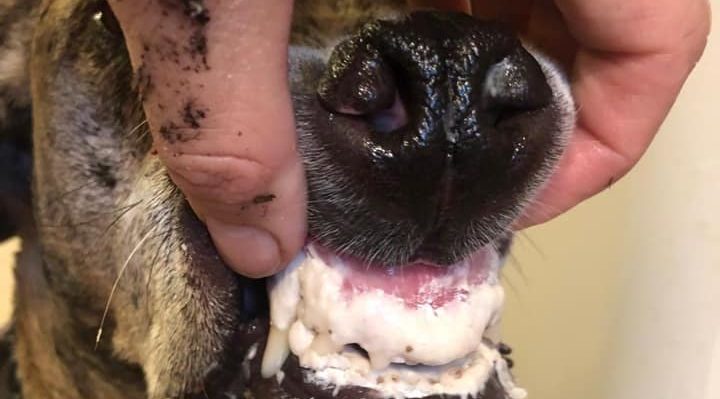 In eight years of writing this weekly blog, I have never asked that question!

Today we’re going to have some fun. I asked friends and dog professionals online, “What did your pet eat? Tell us about the pet! What was the outcome of the incident? ” Their answers are astounding!

Teresa Tuttle (Texas) Twizzlers! My dog ​​sitter left her bag open and River enjoyed some of her snacks. No harm done, other than scaring the sitter (and she lost some Twizzlers).

Linda Ehrenworth (New Jersey) My client’s dog got into beets. I was day-training. It was only after I called in a panic asking where the nearest emergency vet hospital was that I was informed of this over roaring laughter.

Cindy Wilmot (Vermont) Every earplug I’ve ever had.

Anne Hager (California) When I worked as a tech, I saw all sorts of weird cases. A Boston terrier ate a box of light bulbs. Thankfully, she was absolutely fine. Dogs have pretty resilient digestive tracts.

Marni Fowler (Florida) Half a large bag of white flour. Ate some baking soda the next week. I feel like I want to contact all my past clients who gave me money to help them with counter surfing and give it all back. 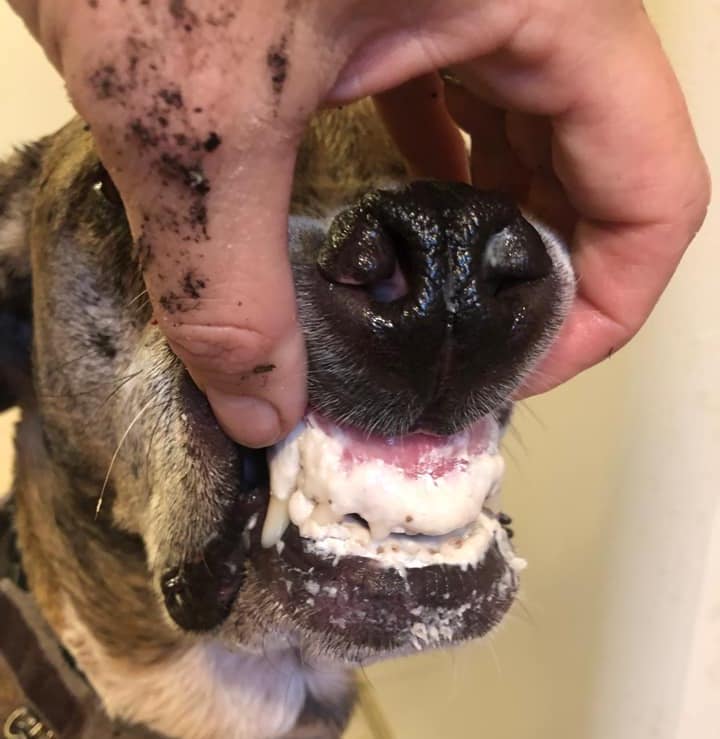 Marni Fowler Two suet cakes, half a bag of mealworms, woodpecker sunflower block, some safflower seeds. That’s all in one adventure. How she did not end up with pancreatitis is beyond me. But the poop — OMG !!

We call her Joli the Goat. We have not found a food she won’t eat. She has magic powers that allow her to reach stuff on the counter that we swear was out of her reach. She’ll also just randomly decide to get into something that’s been sitting there for weeks, for whatever reason. That was the suet cakes. Happened with a box of pictures that had a lighter in it (she snapped that in half), she’s gotten into fertilizer, ate a bottle of BT liquid (turns out that’s not toxic, either). I have a direct line to poison control. Also, we try not to have anything in the house that is dangerous because we just never know. It’s very embarrassing, as a trainer.

And for those people who say they will outgrow it — Joli is 12–13 years old, so…

The bird food was in a large plastic Rubbermaid container. She chewed through the corner, cracked the side, and then feasted. Metal tin of ginger Altoids. Left the tin but full of holes. Blue raspberry War Heads, which apparently turn crayon green on the way out. (War Heads are super-super sour hard candies. These were blue raspberry that dyes your tongue blue. And your poop green, I guess. I didn’t get a chance to eat any so I don’t know if it’s the case with humans.)

Jill Gibbs (Montana) Izzy ate a bag of almonds when my husband left them on the dashboard thinking she wouldn’t climb up there to get them. She didn’t chew any of them — she pooped whole almonds for days.

Timothy Page (Oregon) My partner feeds the dogs nuts. Of course they don’t digest, but the crows eat the nuts, poop and all. It sure makes it easy when I come out to collect dog poop from the yard.

Pamela Dennison (New Jersey) Shadow ate a whole packet of un-popped popcorn — the poop scared me to death! The pile of it was unearthly and terrified me until I figured out what it was.

Sandee Strobel Szabo (Virginia) Mr. Wilson ate a hickory nut and had to have surgery, and he still keeps trying to eat more. Augusta ate an entire mango and suffered no problems. Nicki ate most of a two-pound Whitman’s sampler and the next night had to get Valium shots; she survived. Then she ate a large See’s Rocky Road Easter Egg a month later, survived after we applied hydrogen peroxide; she escaped the bathroom and ended throwing it up on the carpet. Mr. Wilson also ate two-thirds of a full bottle of 180 tablets of Garlic Off from Springtime, Inc .; no issues from it.

Donna Weidert (Washington) As a three-month-old puppy, my border collie would eat anything. But he was having trouble with diarrhea so the vet x-rayed his stomach. There were rocks in it. * LOL * The vet asked me if I fed my dog ​​rocks. Sure, doesn’t everyone?

Karla Smele (United Kingdom) My staffie (14 now, but as a pup) used to eat small stones… several times I was woken up by him throwing up a huge pile of stones on the wooden floor.

Jeanne Brennan (California) I call the object in the photo below, “Piper’s Pinterest Project.” Really, can’t you just picture that on a patio table at night with a votive candle? I came home from work one day and that was on the floor. I was completely baffled as to where the can came from, but I was pretty sure which dog did it. When I went to give a senior dog his evening meds, I realized the can of dog food I used to make the medicated meatball was not in the fridge. I guess I’d left it on the counter. Piper nabbed it, cleaned up the interior, ate the wrapper (fiber matters, you know), then eventually realized the can was not edible. I could not help but laugh. Piper passed away a few years ago, but I still have her Pinterest project. I almost threw it out last year, but holding it, I just smiled, remembering Piper, so back in the drawer it went. 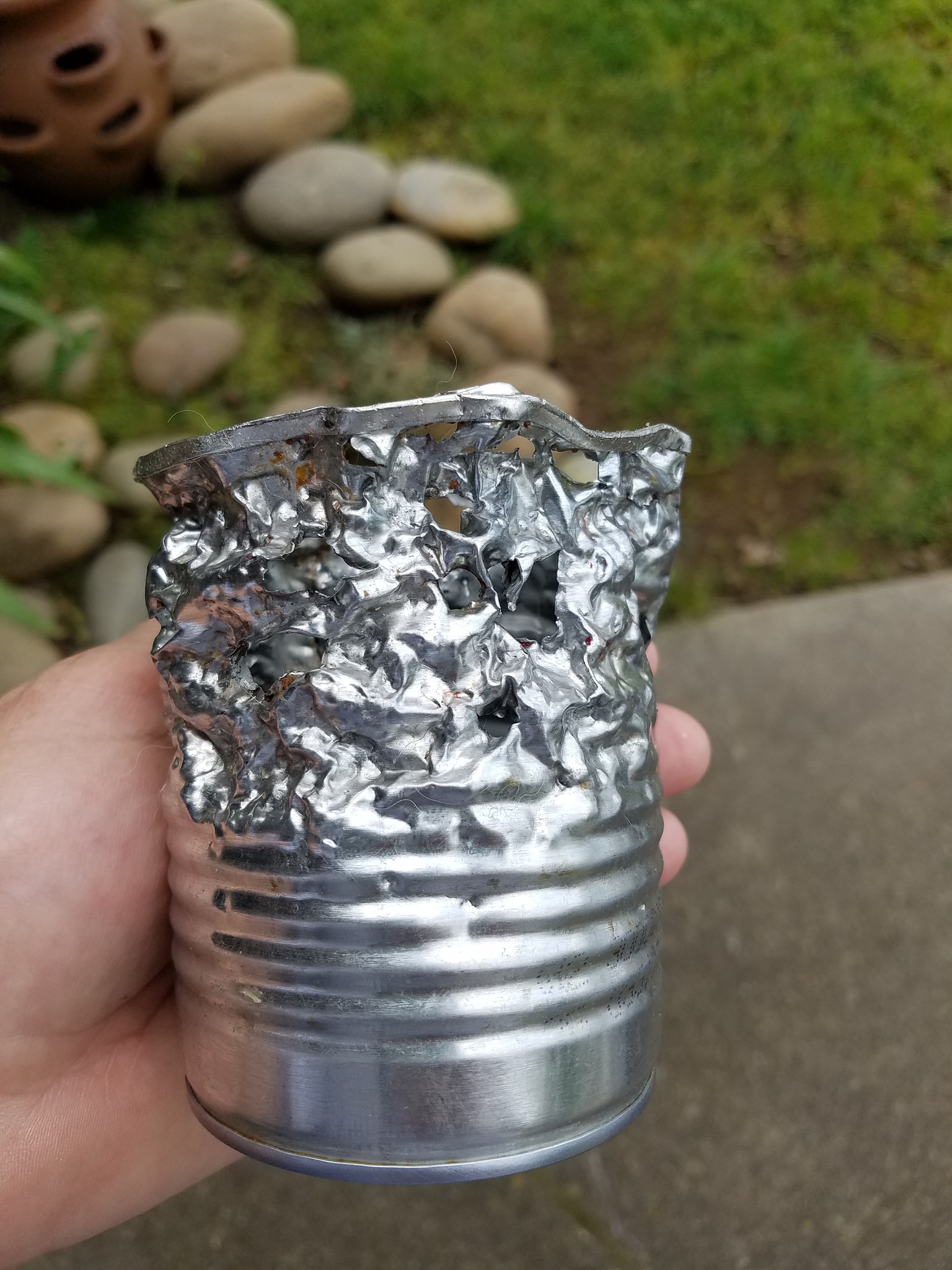 Dale Ward (North Carolina) When my black Lab Wylie was a pup, she would romp around our 47-acre “yard” and pluck dandelions. It was pretty harmless (no pesticides used) and adorably cute. One day, after we came inside, Wylie started acting odd, licking surfaces. The licking increased and got a bit frantic. Then, out on the deck (thank goodness), a huge massive pile of dandelions erupted from her mouth. I could hardly believe my eyes! There must have been the equivalent of four cups of yellow flowers now in a heaping, steaming pile of slime. That was the first inkling of what was to come with my darling dog, the dog who loved to eat just about anything. Wylie, the subject of my book “Raising the Worst Dog Ever” was the absolute BEST worst dog ever.

Erin Darling Looney (Washington) Our mini Australian Shepherd puppy ate a mouse head. Just the head. Left the rest of the body on the floor. We took her to the vet for that one because apparently she was mouse head intolerant. I can laugh about it now! But that bathroom floor will never be the same!

Maria Burton (Washington) A chocolate cake left over from a bachelorette party… covered in penis-shaped glitter… Should have seen the vet’s face when she made my dogs vomit it up. Dogs were fine, humans embarrassed.

Kathleen Huggins (Washington) Full jar of Costco mixed nuts. Unsalted. Two pounds of frozen cod, still frozen. A can of corned beef hash that hadn’t yet been opened. A whole Costco cherry pie. And one day we found her with her head in the dog food bin in the pantry having eaten so much kibble it was just pouring back out of her mouth. Sweet, but very hungry, yellow Lab. Worst was a pan of Ghirardelli’s chocolate brownies, double batch … that one scared us. But she lived through it all; gone now, RIP — or in nutty chocolate doggy heaven. To clarify, we were puppy raisers for a service animal organization. When we got her, everyone warned us about Labs and food, Labs and counter surfing. We were so happy she never tried to counter surf, and patted ourselves on the backs for being such awesome trainers. Then we discovered she had hip dysplasia. First and only in that line of seven generations. But because of that, they couldn’t use her for service and we were given the opportunity to adopt her. We kept her and paid the $ 6k for hip surgery. Carried her around in a sling while she recovered. Only after she recovered did we realize she IS a counter surfer — her legs just wouldn’t hold her before surgery. And so much for our good training. All those gross food events happened in the first couple months after she gained the ability to counter surf. No matter how hard we tried, we would always manage to forget one thing on the counter and she just waited for us to leave the room. Took a couple months to train us, and the addition of a self-closing door on the pantry and a gate blocking the kitchen. She never shared any of it with our two mini Schnauzers. Thank goodness! She had a cast-iron stomach, they don’t.

Lisa Lo (United Kingdom) My pet ate a condom she sourced on a car park ground. She was given an injection to vomit and all was okay.

Rachel Trafford (United Kingdom) One workman’s severed finger — a very greedy Springer Spaniel. It’s a bit convoluted, but a couple of old geezers wanted to take an old iron roll-top bath out of my bathroom and sell it. I thought it would be a nightmare to remove down a tight and twisty staircase, but mansplaining took hold!

After the first flight down, the iron roll-top acted as a guillotine against the oak banister, chopping off the first digit of the chap bearing the weight of the bath. The first phalanx of the said finger parted company with the hand and tumbled down the stairs to an excited, anticipating Springer. The rest is history. My drop cue was not proofed from that distance, and as I was trapped behind the bath two flights up, there was no salvage possible.

Jenny Julian (Oregon) A can of Crisco, a packet of chili seasoning, a package of semi-sweet chocolate bits, a travel bottle of Advil, as many bottles of lotion and body oil as she could get, no matter what the bottle was made of . (Not all in one sitting.) A pizza, two pecan pies she knocked off the counter before Thanksgiving, even though she wasn’t tall enough to reach. A marrow bone she got locked over her top teeth and muzzle, requiring removal by the vet. Lucy lived until she was 16. Nothing sad! She was a stray that looked like a Beaglador.

Jamie Wilke (Washington) My bull terrier ate his buckle collar. The whole thing. I got a call from my then-husband saying, “There is something green coming from Basil’s bum.” I was like, “Oh, it’s just grass probably. No worries. ” He says, “Ummm, no. I think it’s something else and I’m bringing him to you. ” Sure enough, it was his collar. I was able to slowly and carefully remove it with no surgery. I also found something protruding from an Airedale I was grooming, and I slowly removed a whole pair of pantyhose. Some dogs will eat anything.

NEXT WEEK: The fun continues! We’ll share more answers to the question: “Your pet ate what?“