When Boys Exhale is a gripping and touching story of three young Black gay men and their interconnecting friendships. Written and directed by Anthony Green, the play premiered in DC in January 2020 with a sold-out run, had another sold-out run last April in Atlanta, and returns to DC at the Anacostia Arts Center July 22 to 24, 2022.

I’ve not yet seen the play but I’ve read it, and I found it beautiful and moving. The dialog is sharp, smart, emotionally authentic. The characters are well-rounded and believable. They don’t hold back; very little goes unsaid. The ending really got me.

The play takes its title from a 1995 film that two of the young men are longtime fans of, Waiting to Exhale, adapted from Terry McMillan’s novel about four Black women friends. When Boys Exhale is a presentation of Cagedbirds Productions, which Anthony Green founded to create socially conscious projects that affirm African American LGBTQ storytelling. I was fortunate to have a chance to interview him.

John: What was the genesis for When Boys Exhale? What about these characters and this story called to you?

Anthony: A friend of mine was passing away from HIV, and in one of our final conversations at the hospital, he made me promise to tell his life story in a play. His favorite film was Waiting to Exhale. We watched it over and over. Quoting the film and talking about our lives in relation to the film was like our love language. So I thought it would be beautiful to tell his story through the lens of his favorite movie – with Easter eggs and references to it – because that film was essentially the love of his life.

Three of the play’s four characters are gay Black men in their twenties – Jonathan, Andre, and Khalil – and the fourth is Jonathan’s mother. So much about the play reflects the lives of, and speaks to, young gay Black men. How would you describe the play to gay Black men who haven’t seen it yet?

It depends on which generation they’re coming from. If they’re a little bit older, I just say it’s a male version of Waiting to Exhale and they’re sold off the bat. But if it’s someone in Gen Z, I describe it as a celebration of Black gay friendship. There’s a romantic love in there, but the real true love in this story is between Andre and Jonathan. That’s the love that’s gotten me through in my life and saved a lot of people because everyone is not meant to be in a romantic relationship. We all need friendship.

The play feels very personal and specific, full of truths about friendship and intimate relationships that a theater lover who is not a young gay Black man would readily recognize.

And believe so. There are a lot of deep truths in the play about life in general, about friendship, about trauma, about pain and loss. That goes through all lines of intersectionality.

The first production was in DC in 2020. I just moved here from Memphis, so I was really surprised how quickly the show sold out. And from the reaction, I knew I wanted to do it again. But then COVID hit. About a year ago, a new theater owner in Atlanta reached out to me and asked me to bring When Boys Exhale this is Atlanta. People were really excited to see it. We had people from the local HBCUs bringing their students from their gay-straight alliance. People from the local CBOs were bringing some of their clients from the HIV programs or the LGBT-related programs that they had. It was such a community experience. I felt like Atlanta was embracing us.

The play is very centered on the commonality between the Black female experience and the Black gay male experience. Two of the three male characters, Jonathan and Andre, are fans of the film Waiting to Exhale, and at one point, Jonathan’s mother says to the two of them:

SHEILA: I don’t know why you two love that movie about those old women.

ANDRE: Don’t you relate to it? I just mean, we do. Black gay men see ourselves in those women’s struggles; dealing with no good men, communal processing of trauma, having kiki sessions to destress, and struggling with intersectionality in an oppressive patriarchal society

JONATHAN: Plus, at the heart of it, the movie is about friendship. Female friendships have always been more affectionate and expressive than male friendships. The gays love to emulate that bond.

That passage is extraordinary.

For someone who hasn’t seen the movie or your play, what does it mean to exhale?

In the context of the original film, a lot of people construed that once you get your life together and you find a man, that means you exhale. For me, having a more modern look at exhaling, I wanted it to be focused on stepping into your own healing, letting go of past trauma, and just being present in the moment of your own joy.

There’s a passage near the end where Khalil is talking to Jonathan:

KHALIL: Every time I physically get close to you, you hold your breath in anticipation of what I’m going to do next. All I have to do is move close to you and you don’t breathe out until the moment I kiss you or touch you or say something affectionate.

JONATHAN: Wow, I didn’t realize I did that. It must be a subconscious thing. Guess I’m just waiting to exhale…

I read that as relaxing into a relationship with ease, with trust.

I definitely agree. That was my own way of trying to remix or reinterpret the exhale theme.

I really wanted that aspect because so many on-screen gay relationships are sexually or attraction driven. And I wanted Jonathan and Khalil to have that calmness when they’re together, an understanding of each other. That is what drives them together. Not just because, Oh my God, you’re hot. I’m hot. Let’s be hot together. No: There’s something about you that makes me feel safe. There’s something about you that makes me wanna be the best version of myself, that makes me feel I can let go of tensions I’ve had, that I can exhale.

The play is so smart about emotional intimacy and emotional literacy. Your characters just speak out truth that is in the moment about these issues in their lives.

I’ve been moved and surprised by the emotional reaction people have had to the play. Like When Jonathan and his mom are having that exchange and she tells him how much she’ll always love him, I’ve seen a theater full of gay men sobbing. So many adult gay men have never heard that from their mom. The same when Andre and Jonathan have their reconciliation, I’ve seen people crying.

The play is also painfully honest and open about coming out to parents— In Jonathan’s story especially, we see the continuing tension with his mother and we hear of a shocking and traumatizing experience with his now-absent father. It occurred to me that the play might be saying something about how one’s past with one’s parents impacts one’s capacity for emotional intimacy and trust with a peer.

Absolutely. And that was very intentional on my part. The scene we learn the most about Jonathan is the one where he’s not present, Andre and Sheila are talking. We see her not as a mother but as a woman, and we get Jonathan’s parents’ love story. Our parents’ love story has a huge impact on who we are.

Another important theme in the play centers on HIV.

I’m always afraid anytime I do something with Black gay characters putting in HIV because I don’t wanna stigmatize. But if I’m telling my friend’s story, I have to tell his story as he wanted it and as it happened, and doing that, I wanted to make sure I told a full well-rounded person living with HIV’s experience. There’s so many other things going on Jonathan’s life than his status. I love that. And I love that he’s still having relationships and living life.

Alan Sharpe has pointed that the three most recent winners of the Pulitzer Prize for Drama have dealt with Black, queer themes [A Strange Loop by Michael R. Jackson in 2020, The Hot Wing King by Katori Hall in 2021, Fat Ham by James Ijames in 2022]. Do you think these plays’ recent prominence could mean a wider audience for When Boys Exhale?

And to. I think now there is an interest in Black queer stories because there are now examples of what it looks like when it’s done well – when the stories are so well-written and impactful that they go beyond labels of identities. They get to the truth of life, they have depth, they’re entertaining and have colorful characters.

As a writer, what do you want your work to do to people?

I want it to spark conversations. There are things that these characters in this play go through and I went through in my life that I’ve never seen depicted or validated in a theater production or a film. I want people from my community to see my work and feel seen. 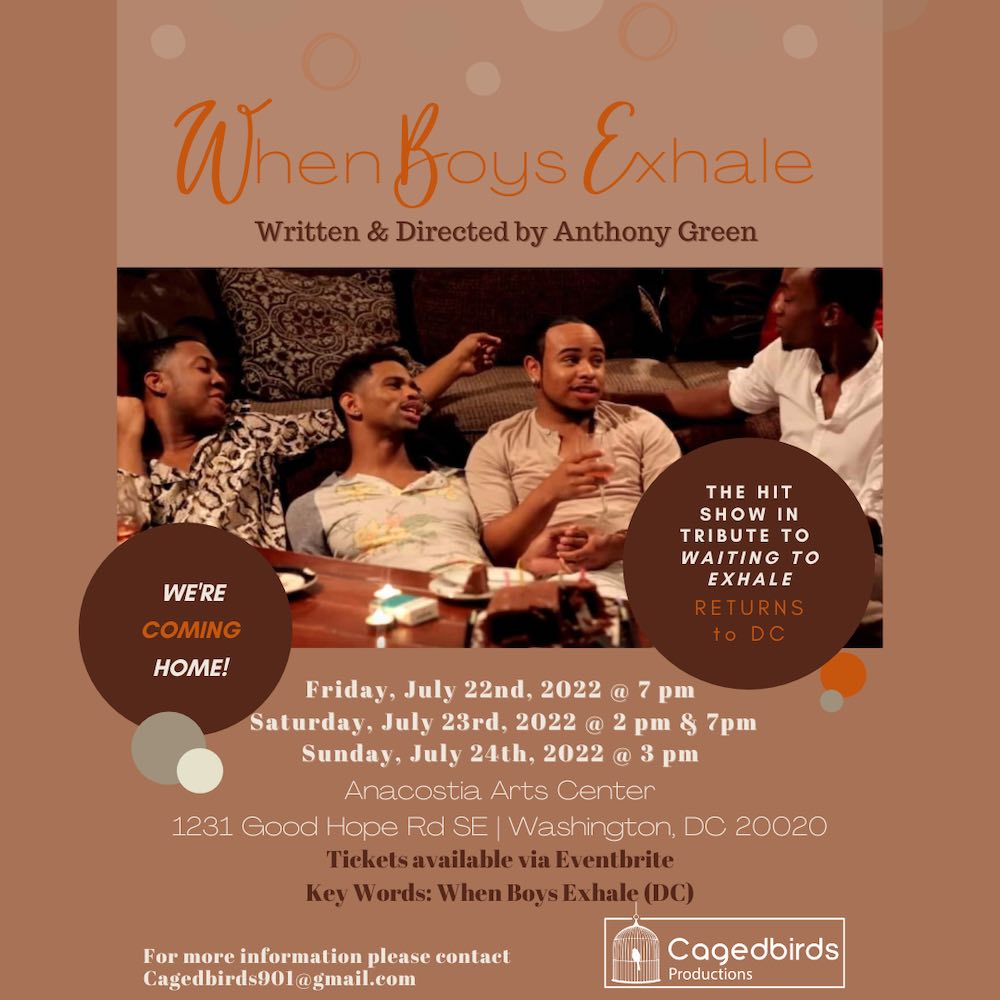 The Talented Mr. Ripley: 5 Thoughts I Had While Watching The Movie For The First Time

‘The Morning Show’ Role Was Too Good To Pass Up – Deadline