It’s creamy, melty, gooey, and 100-percent addictive. We’re talking about vegan cheese. As little as five years ago, one would be stretching the truth to describe most vegan cheeses in this fashion. Over the years, recipes have been reformulated, refined, and at times completely reinvented—making amends for the somewhat rubbery, bland, and generally off-putting product that was vegan cheese of yesteryear. On the whole, vegan cheese is now something to be celebrated. Here is the 411 of vegan cheese—from how it’s made to the very best brands.

The ingredients of vegan cheese largely depend on the style of cheese—different foods lend themselves to different flavors and applications. Starting from the top down, gourmet or artisanal-labeled vegan cheeses are traditionally made with a blend of cashews, oil, cultures, and spices. The cashews provide the creaminess of a soft cheese (think brie, feta, mozzarella, and chèvre) while the cultures add the funk—that addictive characteristic that makes cheese so impossible to resist. While not listed on the ingredient label, time is another essential component of most artisan vegan cheeses. Those cultures need time to ferment and get funky.

Everyday cheeses—those that come in shreds and slices—tend to include oils, starches, nut milk or water, lactic acid (vegan), and natural flavorings or spices. The ingredients for these processed options vary widely from brand to brand and are generally more extensive than artisan vegan cheeses. The key to producing the perfect solid texture that will also melt is nailing the balance between starch and oil content. While not a whole foods approach, these ingredients get the job done. 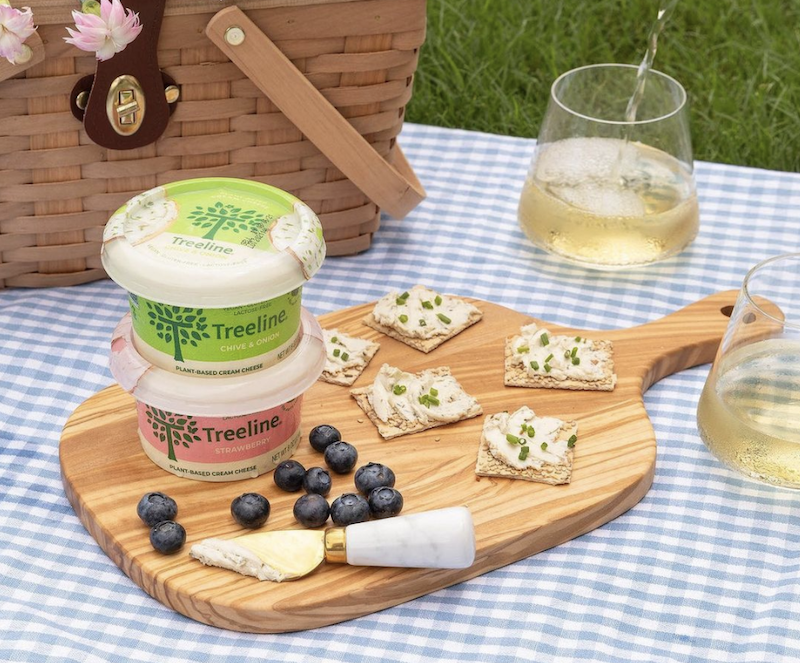 Like dairy-based cheese, vegan cheese should be enjoyed in moderation for those looking to optimize their health.

Some dairy-free cheeses are made from nuts or seeds while others, typically in the form of slices and shreds that melt when heated, are usually made from coconut oil. Coconut oil consists of about 90-percent saturated fat, a higher percentage than dairy-based butter, and decades of research have shown that too much saturated fat can raise your levels of low-density lipoprotein, also known as “bad” cholesterol. In high amounts, this can build up in your blood vessels and raise your risk of heart attack or stroke. The American Heart Association recommends limiting your intake of saturated fat to five- to six-percent of your dietary calories.

That’s not to demonize vegan cheese made with coconut oil—moderation is key. For what it’s worth, high-fat dairy products are a source of saturated fat. But, plant-based cheese doesn’t come with the other negative effects of dairy. Compared to conventional dairy cheese, dairy-free cheese has the benefit of not being linked to a key driver of human-caused climate change: cattle farming. Plus, from an ethical vegan point of view, dairy-free cheese doesn’t rely on the forced impregnation of a cow in order to induce milk production. See here for more information on the downsides of the dairy industry.

Of course, vegan cheese nutrition depends on the brand, so be sure to read the label to ensure that your choice aligns with your nutrition goals. Dairy-free cheese isn’t a health-food, but by all means, enjoy your cheese board at parties and indulge in a crispy, gooey, buttery grilled cheese—just not every day. 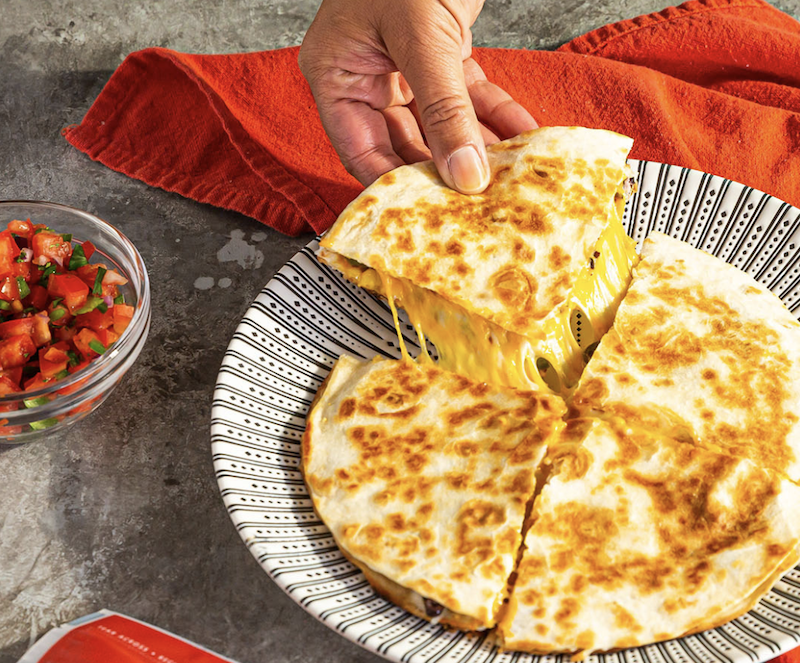 There’s good vegan cheese but there is also great vegan cheese. The kind that will make your eyes roll back. The kind that will get your skeptical friends to finally admit vegan food actually tastes good. Whether you’re looking for a stretchy cheese that truly melts for supremely good quesadillas, molten queso to smother over nachos, or a sophisticated cheese wheel that will make your party the talk of your friend group, there’s a vegan cheese for that. Here’s what to nab the next time you’re at the grocery store (or shopping online). 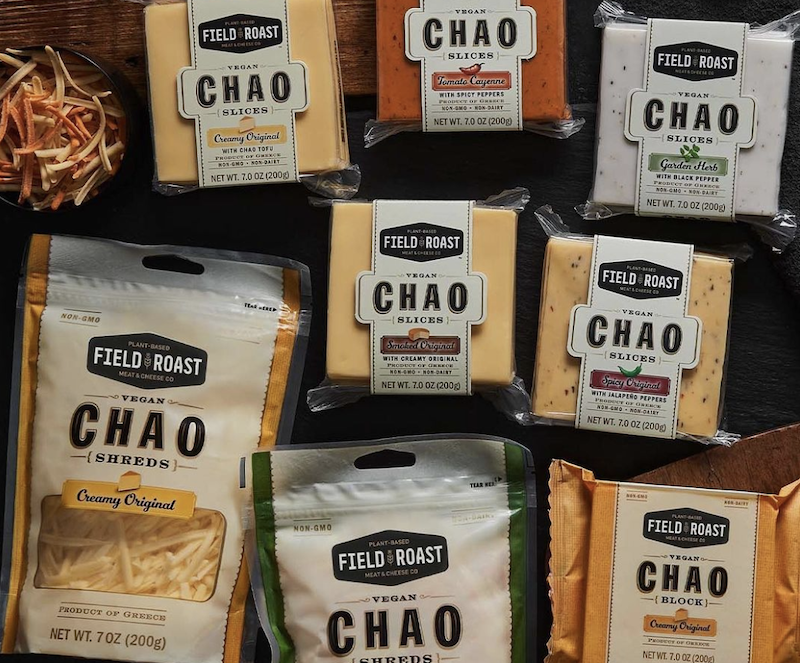 For a neutral-tasting cheese that goes with almost everything, check out Chao’s Creamy Original in block or slice form. While mild on its own, this white cheese adds that creamy element and a touch of funk to sandwiches, salads, and flatbreads. The Chao brand falls under Field Roast—the makers of some of our favorite vegan sausages and buffalo wings—so you can be confident in the quality.
Learn more here 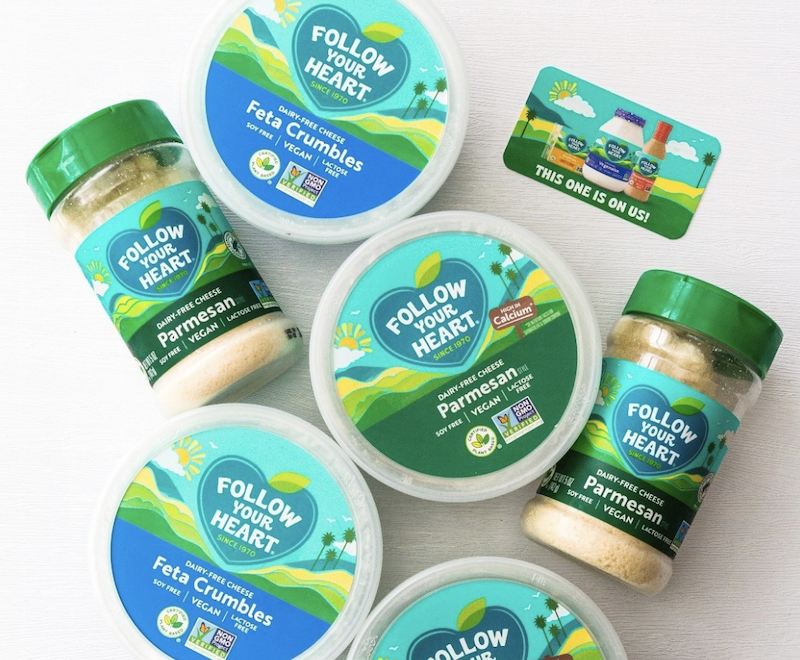 This 52-year-old company makes more than just Vegenaise, and it does it well. The shreds, slices, and blocks are terrific as-is or melted on a beefy vegan patty, gooey grilled cheese, or luscious pasta sauce. The variety is extensive—from feta crumbles to smoked gouda slices. We encourage you to try them all and find your favorite. Oh, and pro tip for that grilled cheese: spread a thin layer of vegan mayonnaise on the outside of each bread slice for the crispiest, melt-in-your-mouth bite of sandwich you’ve ever eaten.
Learn more here 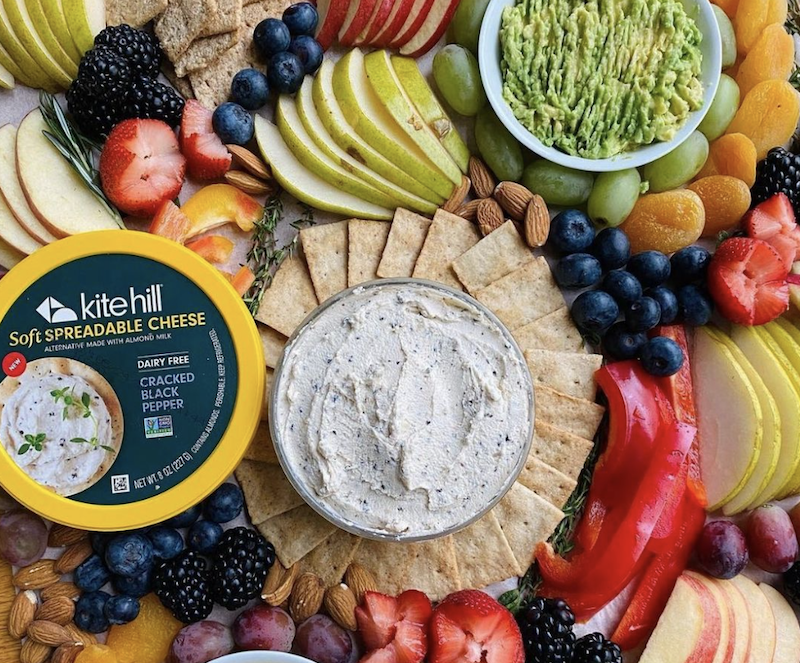 The search for the best vegan cream cheese ends with Kite Hill. The almond milk-based vegan cheese company makes a perfect replica of thick, New York-style cream cheese that won’t weigh you down. Kite Hill’s ricotta (and ricotta-filled pasta) are also products to check out if you’re in the mood for gourmet Italian.
Learn more here 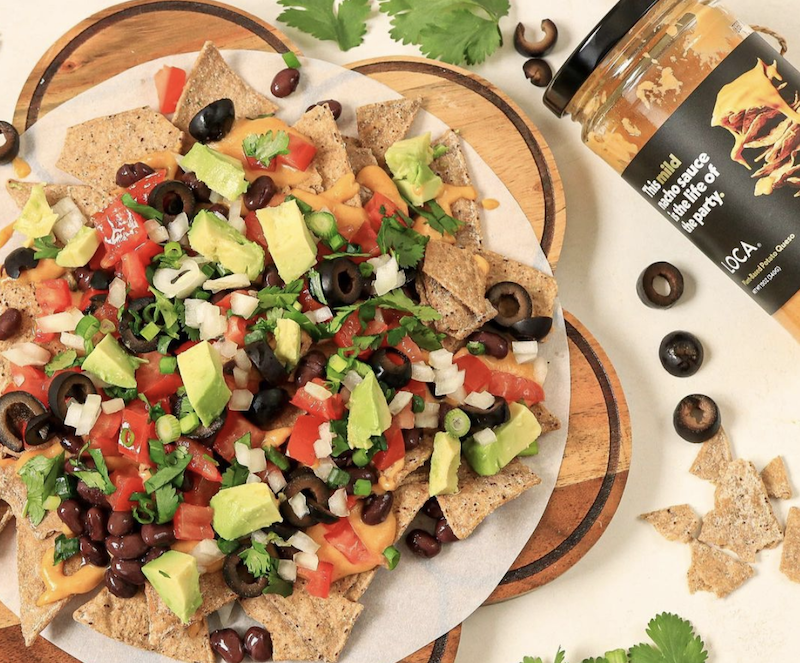 We wouldn’t be surprised if we found this crave-worthy vegan queso in stadiums one day. It’s thick, a little salty, and perfectly spicy. Surprisingly, it’s made with ingredients everyone can pronounce such as potatoes, carrots, jalapeños, nutritional yeast, and spices. Heat up and drown a pile of tortilla chips with it. Finger-licking is unavoidable.
Learn more here 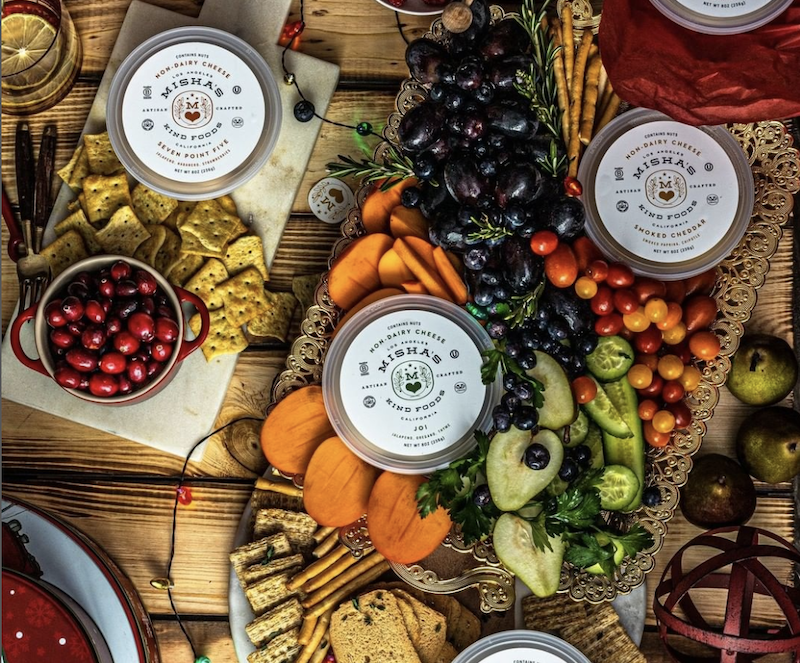 These cheese spreads are Jay-Z-approved. The entertainer invested in this Black-owned brand, along with NBA hotshot Chris Paul. Sold in tubs, each of the eight flavors add texture and taste to sandwiches, avocado toast, bagels, and flatbreads. Fan favorites include the caper-infused Lox and umami-laden Black Truffle.
Learn more here 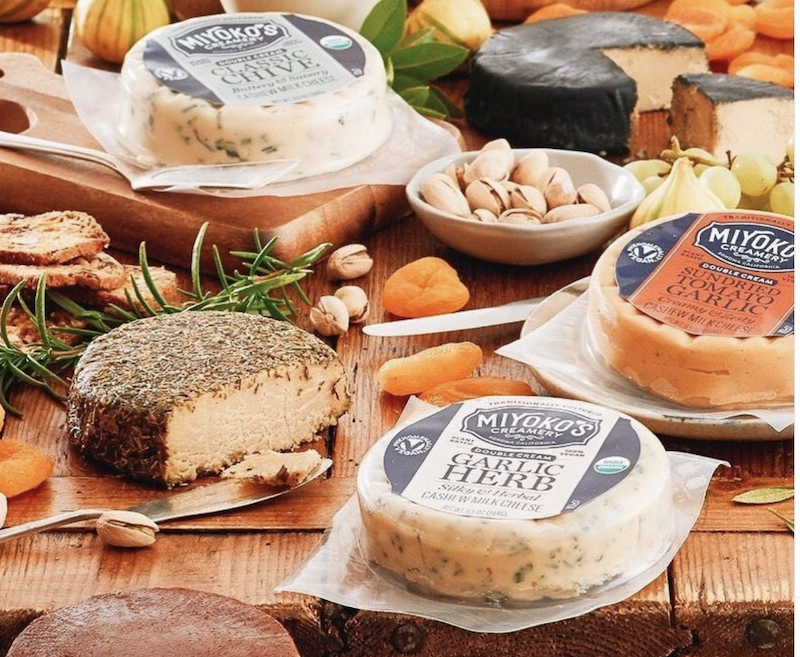 Launched in 2012, this vegan cheese company may not have been the first non-dairy cheese on the market, but it is still a pioneer in its own right. Miyoko’s mozzarella and gourmet cheese wheels were the first vegan cheese options to really turn heads and reach mass distribution. For many, Miyoko’s is the gateway cheese. The brand has expanded into slices, shreds, spreads, blocks, cream cheese, and even kid’s cheese sticks, but the wheels are where it truly shines. Popular flavors include the Smoked English Farmhouse, Winter Truffle, and Garlic Herb.
Learn more here 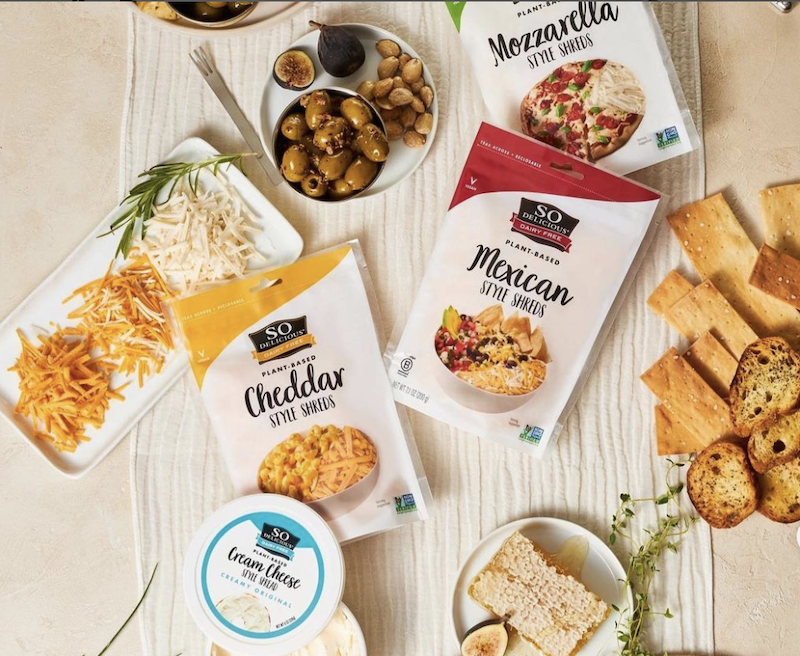 So Delicious seems to do it all—including vegan cheese. The behemoth of a company has dozens of products to its name, but the dairy-free shreds are particularly worth noting. Best in melted form, the Mexican-style Shreds are ideal for burritos, enchiladas, and nachos, but they’re good enough to enjoy as-is on top of a taco salad.
Learn more here 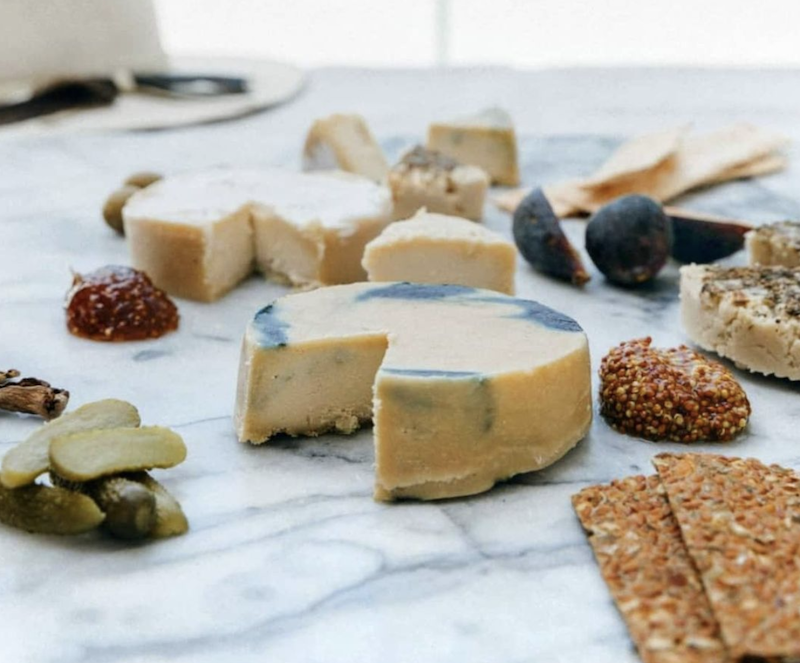 If “special occasion cheese” is a thing, SriMu is most certainly it. This small-batch, artisan cheese is not cheap, but each carefully crafted variety packs an overwhelming punch of flavor in each un-brie-lievably luxurious mouthful. If you’re looking for a distinctive vegan bleu cheese or impressive, truffle-infused camembert, check out this brand. Pro tip: the cheese subscription makes for a surprisingly unique gift for any obsessive cheese.
Learn more here 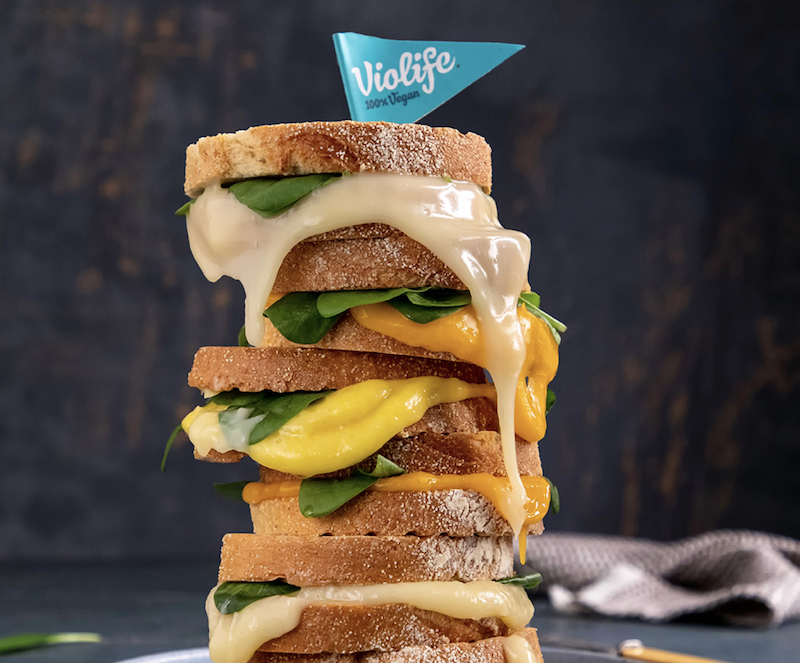 A popular and widely available brand in the US, Canada, UK, and throughout Europe, Greece-based Violife comes in shreds, slices, blocks, and more, impressing people with its flavor and meltability. The next time you’re craving some comfort food, try the Colby Jack Shreds on homemade nachos with the works.
Learn more here 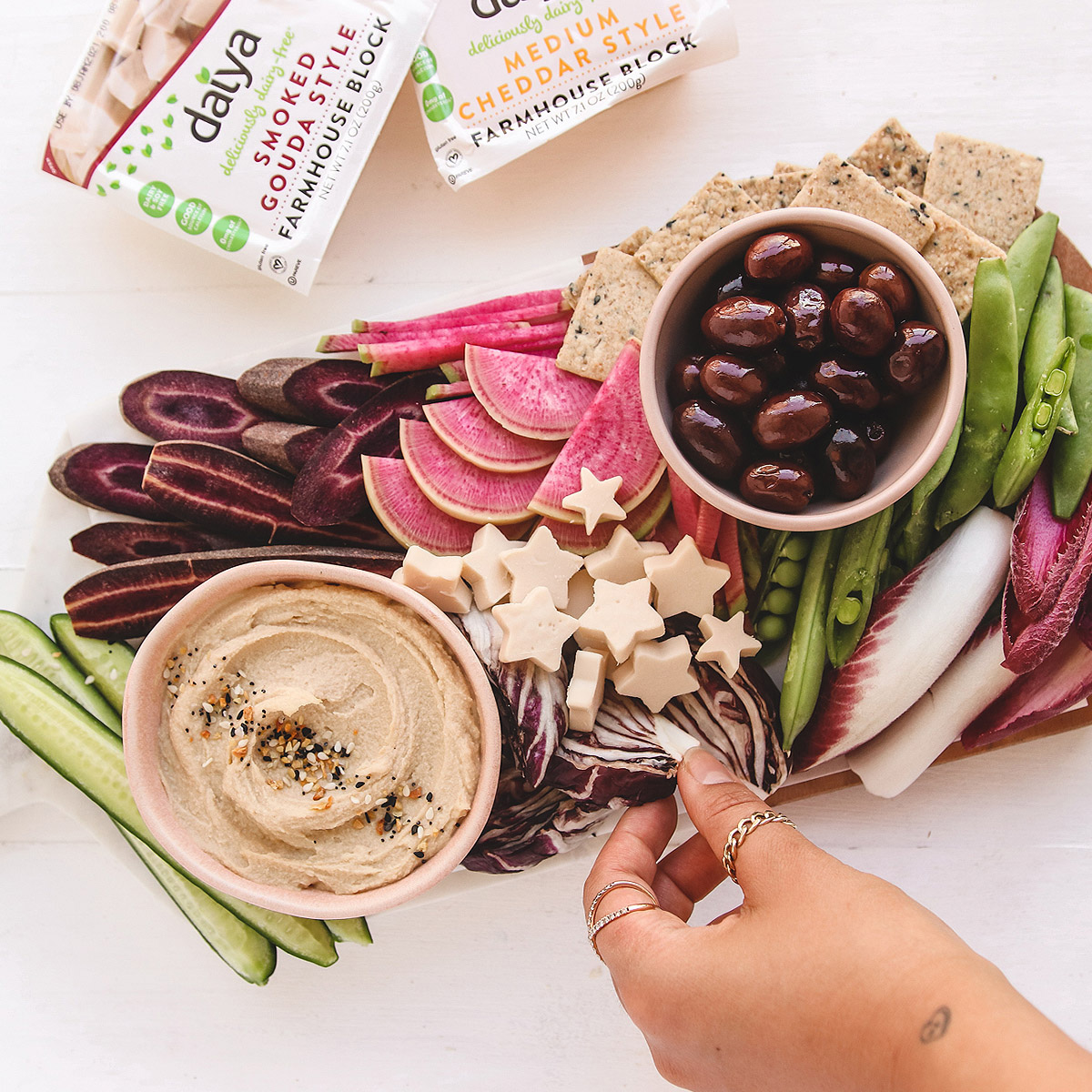 Daiya is one of the early influencers of the vegan cheese movement. Founded in 2008, the brand now offers a wide variety of dairy-free items including shreds, blocks, slices, and a plethora of frozen convenience foods. Its new Cutting Board Collection is a step above both in taste and texture. We’ve been using the Mexican 4 Cheeze Style Blend in quesadillas—the meltability is unmatched.
Learn more here 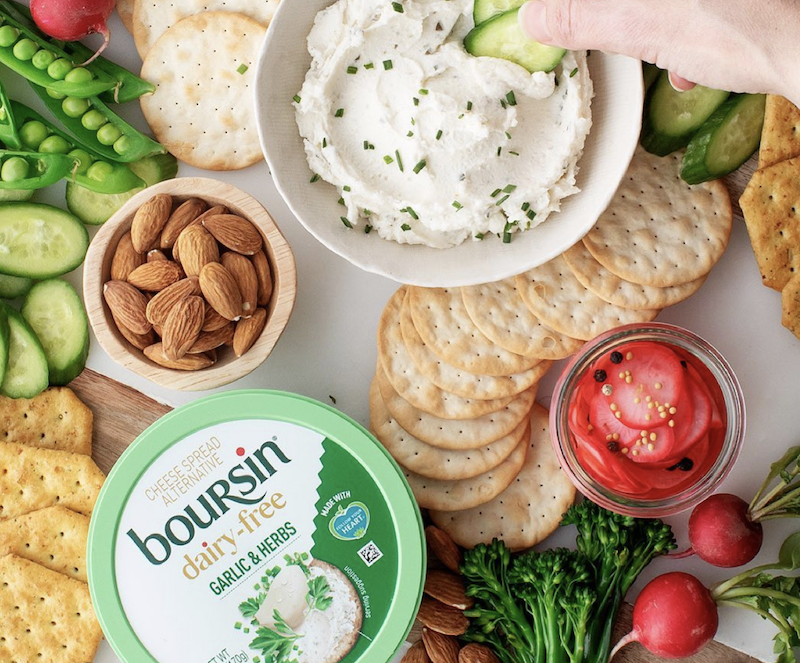 Who would have guessed that by 2022, Trader Joe’s would have its own range of vegan cheeses? The grocer carries its own brand of non-dairy slices and shreds along with popular brands such as vegan Boursin and Miyoko’s. Finally, TJ’s can be a one-stop shop.
Learn more here 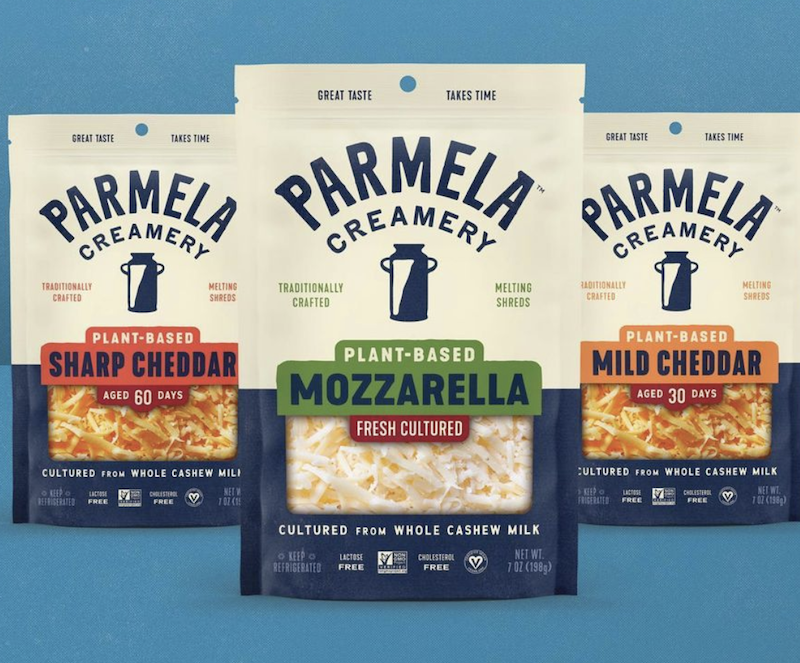 Parmela uses the classic cheesemaking processes to transform cashews into cultured vegan cheeses with just the right amount of funk. Try melting the Sharp Cheddar slices on a plant-based patty or layering them on a thick vegan cold-cut sandwich.
Learn more here 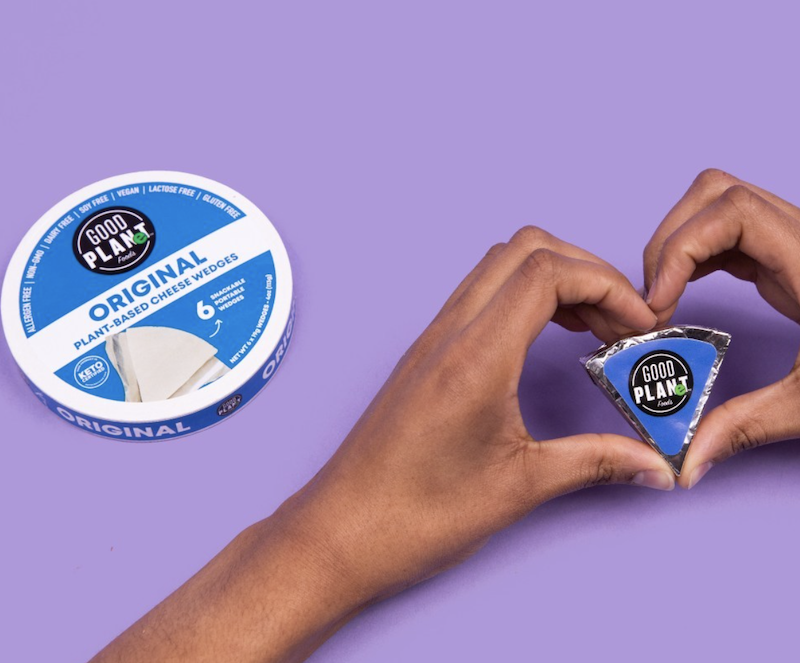 Offering a variety of familiar flavors, GOOD PLANeT delivers dairy-free slices, shreds, and wedges that are all soy-free. The wedges are the latest innovation and remind us of the snackable BabyBel cheeses of our pre-vegan days. (But, there’s a dairy-free version of that now, too.)
Learn more here 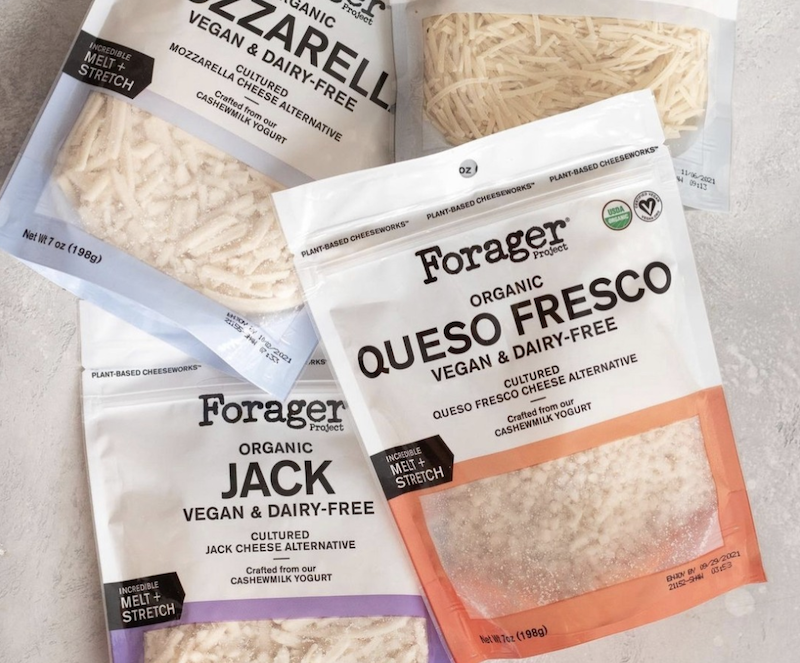 While Forager has been around for years, it just recently stepped into the vegan cheese category. In lieu of shreds or slices, this vegan brand went after a rarer cheese product—queso fresco. While the product looks a bit like pellets in the bag, it melts adequately and adds that gooey, cheesy texture to enchiladas and chiles rellenos.
Learn more here 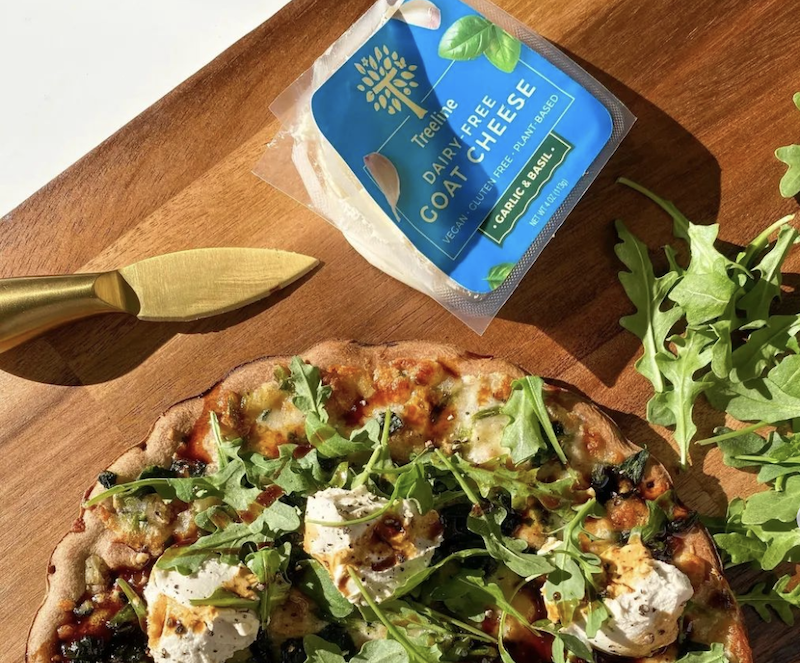 Based on European cheese-making traditions, Treeline’s nut-based cheeses are cultured and aged to perfection. Styles range from French-style soft cheeses to slices and shreds and cheese wheels. You could create a wonderfully varied and delicious vegan cheese board with just a few of Treeline’s outstanding products, accompanied, of course, by some jams, dried fruits, sliced ​​baguette, and crackers.
Learn more here

For more on vegan cheese, read:
The VegNews Guide to Vegan Cheese
How to Pair Vegan Cheese With Wine Like a Pro
8 Fabulous Vegan Cheese Shops Across the US

Tanya Flink is a Digital Editor at VegNews as well as a writer and runner living in Orange County, CA.